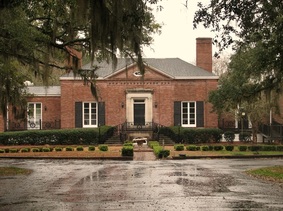 The history of Wedgefield Plantation goes back into South Carolina's Colonial Period when Georgetown was first settled by Europeans. It was included in one of the first grants to be made, and the plantation itself was in operation and prospering before 1750. This estate is located a few miles north of the town and their histories and traditions are closely interwoven. The second manor house to be built at Wedgefield was a large two and a half story, rectangular building with a detached kitchen. It was erected in the early 1760's shortly after a prominent planter-merchant purchased the place in 1762. The first house was a small, one and one half story cottage; and for many years after the second house was constructed , it was used by the plantation overseers. The owner was a man of considerable means and owned large town houses in Georgetown and Charleston, where he spent most of his time engaged in his business and in politics. He was not an office holder, but was an influential figure in the political workings of the period and in working behind the scene.

The new plantation house was simple in design, but was spacious and elegantly furnished. Here he entertained his business and political associates from other sections of the country and from abroad. When the American Colonies entered into the war for independence, the owner of Wedgefield did not choose to take sides; although members of his family were actively engaged in the Revolutionary Movement. His business was primarily supported by England. As months passed by, he found it even more difficult to maintain his position of neutrality. Almost without realizing what was happening, he found himself aiding one side and then the other. This fence-straddling, however, was brought to an abrupt end when the British forces occupied Georgetown making it one of the strongholds and supply bases. It was then that the merchant announced that he was a Tory. This brought down the wrath of his family and neighbors upon him, and they openly labeled him a traitor.

He had a daughter living with him. She did not share his views, but dared not voice her opinions lest she offended him. She remained strictly loyal to the Colonies and in time became one of General Francis Marion's most valuable secret agents. It was due to her alertness and the information that she gathered and furnished him with, that many of his exploits met with such great success. Her house on Georgetown adjoined the cemetery of Prince George Church. Dispatches from the rebel general were left in one of the vaults in the churchyard where they were picked up by her and she in turn would leave her information at the same place where one of his spies would find it.

Revolutionary Georgetown was a small place, but in it were many large and comfortable homes. As the war wore on, the place became more crowded and congested. Every house in the town, regardless of the political alignments of the owners, was required to furnish quarters for the British and Tory troops. As reinforcements poured in from England, even the small outbuildings were taken over for this purpose; and in many cases the owners were crowded into smaller quarters or moved into the country.

Whenever the wounded and sick began to be sent in, many of the larger homes were made into hospitals and convalescent homes. The American prisoners taken were herded into the barns and stables. Every available square foot of housing space in the town was filled beyond capacity.

Due to these conditions some of the plantations near the busy little port city were taken over for use by the troops and recuperating soldiers and were also used to quarter some of the more important prisoners of war. They were housed in the residences and the outbuildings, and a small guard was left to police them. Wedgefield was just such a place. Several highly prized prisoners were sent there. Two old men and four women of their household who were taken with them interned at Wedgefield. Some twenty troops who were on rest leave were stationed there as guards.

One of the prisoners was most important to his captors and caused the wile little American, General Francis Marion, great concern. He was the father of one of the trusted authors in Marions Brigade. The old man was very proud and arrogant, but he was also in his dotage and at times became very confused. He had been present when many of the plans and strategies for some of the local operations had been formulated; and his son, as well as the General, were afraid that in an unguarded moment during one of his seizures or confusion, or in a proud, boastful mood he might unknowingly furnish the enemy with damaging information. It was most important to them that he be found and taken beyond the reach of his captors.

Marion sent one of his trusted spies into Georgetown to try to learn where the old gentleman was being held. He was told to get in touch with the merchant's daughter and have her help him obtain the information. The young woman stated that she had seen the old man, his daughter, and a niece, and that along with his wife and a granddaughter the party had been temporarily lodged in her father's servant house under a heavy guard. No on had been allowed to see them. The day before, all of them had been taken away early in the morning, but to where she did not know. She was certain though that their new quarters could not be too far away, for the detail that escorted them had returned to Georgetown before lunch time.

She further added that her father had sent a small wagon loaded with household goods to his plantation along with the party escorting the prisoners. Perhaps they had been quartered at the plantation along with the sick soldiers. To make certain as to their whereabouts, the cunning woman persuaded her father to secure a British guard to escort her to the plantation. She gave as a reason for leaving that she wanted to select some poultry for the household needs in town, to talk to the cooper about constructing some crates, and to remind him of some needed repairs on the town house.

As soon as they arrived at the country place, she went into the house under the pretense of taking some cookies to one of the wounded soldiers. Upon entering, the first people that she saw were the old man and his wife. Her findings were promptly reported to the scout, and the two of them began planning as to how they could have the prisoners returned to Marion's camp. It was decided that on the following day the Tory's daughter and several other Tory soldiers at Mansfield plantation, a place located not far from Wedgefield, would see to it that the guards at Wedgefield would be among the guests.

Their plan worked perfectly, for only one man was left to guard the house and prisoners.

Just about twilight a party of Marion's Men galloped up the avenue of Wedgefield on horseback. The sentry left on duty heard the approaching animals. He thought that they were bearing more soldiers from town. He did not give the enemy a thought, for it had been reported that Marion had left the area. He ran down the steps into the road to greet the horsemen. They were almost upon him before he recognized them. In haste he drew his pistol an took a quick aim at the man nearest him. His adversary also drew a gun. Both shots were fired simultaneously, but neither ball found its mark. Instead, a saber-wielding calvaryman with one long sweep, severed the sentinel's head from his body!

The event took place so quickly that those present could not readily comprehend what had actually happened. Before falling to the ground the headless body of the guard reeled and tottered about, then fell and struggled like a chicken that had just had its neck wrung. It was a horrible scene, one never to be forgotten by those who witnessed it - a tale that each of them often told in the years that followed. The ill-fated British dragoon was buried in the garden near the old Wedgefield house. The American prisoners were retrieved and taken back to Marion's camp, and the wounded British and Tory soldiers that were able to travel were also carried in as prisoners of war.

For generations following this unhappy incident, people in the vicinity have told of having seen the ghost of the unfortunate soldier. When the spirit first appeared, we do not know; but we have been told by one reputable octogenarian that she had heard the story from her grandparents.

Usually before the ghost is seen strange noises are heard. Sometimes it sounds like the distant roar and clatterings of the hooves of many horses. This happens just before nightfall. Then the ghost appears, an awful gruesome sight to behold! He appears in the form of a headless body of an eighteenth century British Dragoon tottering about the yard with pistol in hand searching for his head. He always frightens those who see him, and he vanishes as suddenly as he appeared. When the prelude of thundering hooves is not heard, his appearance is announced by what sounds like chains being dragged across the front porch.

Other persons have related that they have seen the phantom late at night, usually on moonlight nights, pacing up and down the porch of the old Wedgefield house. On these occasions he sometimes wears his head and those who see him are always puzzled and startled, but are never overcome with fright as when his is seen in the yard at dusk.

During the 1930's the old Wedgefield house was dismantled and replaced by the present handsome mansion now gracing the expansive gardens. It is one of the showplaces of the Low Country. Since the removal of the old building, the specter has not been seen as often as he was in the past; but he still haunts the place in a section of the garden where the former residence once stood. Even in the new manor house strange noises are heard that cannot be accounted for, but those who hear them are certain that they must be the ghost of the ancient soldier exploring the new house.