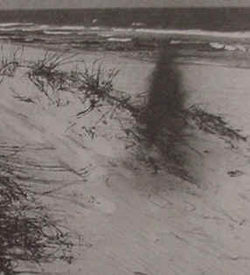 Historical ghost stories abound in South Carolina, but one of the oldest and most famous is the story of the Gray Man of Pawleys Island, a coastal community in Georgetown County. Several versions of this story exist, but all say the apparition appears before major storms to warn the island’s inhabitants of approaching danger.

The oldest version begins with a young woman from Colonial Charleston, the daughter of a prominent family. She had many suitors, but would not choose among them because she was in love with her wild and reckless cousin. Both sets of parents objected to the match and discouraged it by sending the young man to Europe. News soon arrived from France of his death in a duel. Brokenhearted, the young woman went into mourning, refusing to see suitors or other callers.

A year later, a young wealthy rice planter from the Waccamaw area visited the family. A recent widower, he fell in love at first sight with the still grief-stricken girl and sought her father’s permission to court her. The father agreed, but told the young man the sad story of her previous romance. Eventually, the young planter won her hand and the couple married. The newlyweds wintered on a large estate on Waccamaw Neck and summered on Pawleys Island.

During the Revolution the planter served as a captain under Francis Marion. While away fighting the British in the summer of 1778, his family moved to the summer home on Pawleys Island. One evening, a violent storm foundered a ship off shore. The slaves saw one survivor stumble out of the surf. The slaves told him their master was away, but that the mistress would provide him with shelter until the end of the storm. They took him to the summer house and gave the stranger food and dry clothes. When the mistress of the house came to greet him, she fainted. The mysterious stranger cried out and ran from the house, disappearing into the storm. He was her lost love thought dead many years before. It was later learned he died of yellow fever and exposure while trying to find his way south to Charleston. It is said he still haunts the island in the vicinity of this old house, a shadowy "Gray Man" warning islanders of storms and the perils they bring.

Often, investigation into documented history reveals discrepancies that can cast doubt on the accuracy of legends like that of the Gray Man. The discrepancy here lies in the date of settlement on Pawleys Island. Recent historical research indicates the island resort is of a more recent vintage than the one described in the story. During the 18th and early 19th centuries, the term "seashore" described the eastern edge of the mainland. The summer residences of the rice planters tended to be along this eastern edge of the mainland or on North Island near the mouth of Winyah Bay. Historical records, including maps and plats, do not document any settlements or homes on Pawleys Island before 1822. The "Pawley or Allston House", which is of construction of the late 18th or 19th century, does not appear on any plats of Pawleys Island until after 1858. It is speculated that the house was built and used on the mainland and moved to the island via a causeway built in 1845.