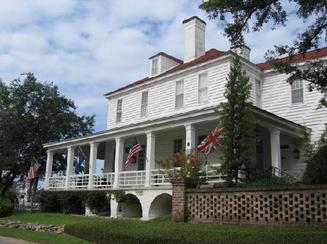 Some years before the Civil War, a wealthy family lived in this beautiful homeplace by the river. They had only one child, a daughter, on whom they showered all their love and attention. The girl was closely guarded by her parents to ensure a proper upbringing. She grew into a great beauty and was known by all the town's citizens for her gracious manners and shy nature.

The young enchantress was very fond of pets and always kept several dogs of rare pedigree. One day as she was throwing balls into the yard to see which dog was the swiftest retriever, a young officer from a ship docked at her father's warehouse happened to walk by and was captivated by the girl's loveliness. He retrieved one of the balls that had fallen nearby and carried it up the broad steps to the shy maiden. Perhaps it was love at first sight. Before long, the two began to see each other on a regular basis, and their relationship blossomed with the passing of the days.

The young woman's tutor became worried about the seriousness of the affair and spoke to the girl's father, who was outraged. What made a common ship's officer think he could pay court to his daughter? He marched straight on board the ship and demanded that the captain forbid any further contact between the two lovers. Returning home, the father informed his daughter that she was never to see the young man again.

The captain did not take kindly to the father's demands, especially since the officer in question was his favorite nephew. Perhaps he aided the young couple. At any rate, the two lovers found a way to meet. When all those within the house were asleep, the girl would put a light in her upstairs window, and the young officer would know that all was safe. The two would then meet in the garden for a few brief but tender stolen moments.

The young woman would wed no other man and continued to live in her parents' house. Whenever the officer's ship was in port, the couple held their romantic trysts. Then, without explanation, the officer's visits suddenly ceased.

The heartbroken girl continued to place a lamp in her window every night. After a time, the light came to be a symbol of the love that she could never forget, yet that was doomed never to be. Eventually, she became a recluse and was rarely seen outside of the house. Following her parents' death, the servants and the dogs were her only companions.

As the Civil War drew its dark wings about Georgetown, stealthy blockade runners used the light in the window of the Cannon Street house for navigation. The saddened but loyal woman still faithfully placed the lamp in the window every night. Most thought she was doing what she could to aid the Southern cause. Only a few knew the real reason for this strange practice.

It was not long after the war that neighbors, alerted by barking dogs, discovered the poor woman's body in the house. She had apparently died of a heart attack. Some might say that it was a broken heart.

In the years that followed, many families lived in the old house. Strange noises were heard from time to time, and a light was often seen shining from the upstairs window. One resident even saw the form of a beautiful girl walking down the front steps into the garden. Others told of seeing a ghostly visage surrounded by barking dogs. The house was finally abandoned for many years, during which it acquired a sinister reputation.

In the 1930s, the house was restored to its former glory. It became one of the great showplaces of the Georgetown historical district. Its whitewashed walls and bright windows now look proudly over the harbor, recalling the grandeur of lost days. But there are many who will tell you that the sad ghost still maintains her lonely vigil each night from the upstairs window.